A big thank you to everyone who turned out to either race, marshal or just enjoy our final League race. The riders didn’t disappoint, with some great racing right from the start as both leagues were still wide open with several riders in contention for top spot.

The A4 league was tied going into the final round GoreyCC’s Brendan Dunne and Rossbury Racing‘s Jim Wall both knowing that only a win on the night was going to guarantee the title. But South East Road Club‘s Wayne Byrne had other ideas and stayed away from an earlier break for a great solo win, which left a sprint finish battle for 2nd and Brendan just edging out Jim on the line!

The A1/2/3 league title decider was shaping up to be a lively affair with only 3 points separating the top 7 riders and a two man attack right from the start confirmed we were in for some thrilling racing. They were quickly reeled back in however by the high tempo of the chasing bunch. Another 3 man break developed later in the race and managed to open a sizable gap back to the bunch, with Rossbury’s Martin Mizgajski, Slipstream Cycling Club‘s Declan Kinch and Slaney Cycling Club‘s Reece Young battling for the win. A photo finish confirmed it was Matin however who literally “inched” out Reece on the line, with Declan taking 3rd.

A big thank you to our sponsors, without whom there would be no league. To all the marshals over the 5 weeks who kept everyone safe, especially the lead car drivers and moto riders Pat and Gary of Slipstream and Gordon and Shane on the motos. To the clubs and riders for not disappointing and keeping us all well entertained with some great racing. To Derek Webb for all his organisational skills and tireless work behind the scenes. To Chef Nicola Redmond for the post race BBQ and thanks as ever to Sean Rowe for his fantastic pics which you can see more of in the link below. 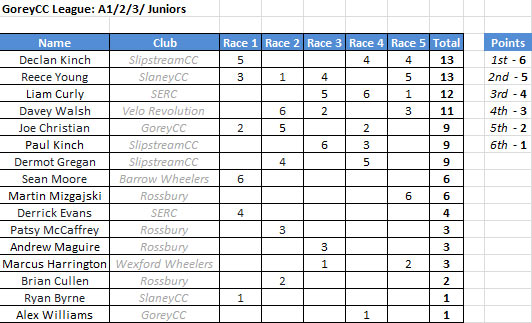 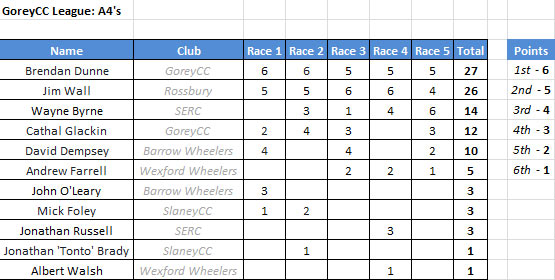